Manchester United go to Crystal Palace in the Premier League on Thursday night needing a win to move back within one point of Chelsea, with the opportunity to leap into fourth place.

The Red Devils are currently level on points with Leicester City, though three goals behind. The Foxes host Sheffield United two hours before United kickoff at Selhurst Park.

Ole Gunnar Solksjaer’s side were pegged back to a late 2-2 draw at home to Southampton on Monday night, whilst Chelsea played their next game the following night, meaning the Blues will have had 48 hours’ additional rest before the two meet at Wembley in their FA Cup semi-final.

That means the United boss really needs to make a number of changes for the trip to Southeast London in order to keep his squad fresh, with the FA Cup arguably a big priority. Solskjaer is helped out by the fact Palace have lost five straight since their Premier League status for next season was confirmed.

Here’s how I think Manchester United should line up against Crystal Palace:

Goalkeeper: David de Gea
Sergio Romero is the cup goalkeeper so I expect David de Gea to keep his starting place in the Premier League.

Defence: Diogo Dalot, Eric Bailly, Victor Lindelof, Brandon Williams
There’s been a lot of talk of Diogo Dalot coming in at left-back this week. The Portuguese defender hasn’t started a Premier League game since October but I think he gets the nod in his natural right-back role in this one, meaning Aaron Wan-Bissaka is rested versus his former side. Harry Maguire looks desperate for a rest and I don’t see the England international starting both of the next two games. Therefore I think Eric Bailly gives him a reprieve, whilst Victor Lindelof keeps his place. Luke Shaw isn’t expected to recover from a twisted ankle from Monday night but I don’t see why Brandon Williams won’t recover from a cut above the eye to start at left-back three days later.

Midfield: Scott McTominay, Fred; Jesse Lingard, Bruno Fernandes, Daniel James
Scott McTominay and Fred have started a number of games this season so them two coming into the starting lineup shouldn’t cause many problems. The Brazilian replaced a tired Paul Pogba on the hour on Monday night anyway, whilst Nemanja Matic won’t have the energy to start three games in seven days. Mason Greenwood looked tired even before he picked up an ankle injury versus Southampton so I don’t see the teenager starting this one. Ole has played Jesse Lingard down the right wing a few times so this should be another opportunity for him. Bruno Fernandes seems to be a bundle of energy and could therefore keep his place in the number 10 role. I wouldn’t be overly surprised if Marcus Rashford or Anthony Martial started down the left wing but with Crystal Palace’s form it’s a good opportunity for Daniel James to get a chance having looked hungry in his past couple of appearances off the bench.

Striker: Odion Ighalo
Take your pick from Martial, Rashford and Odion Ighalo. With the former two likely to be saved for the FA Cup, Odion Ighalo could come into the starting lineup on Thursday. Still awaiting his first Premier League goal for Manchester United this could be the perfect opportunity.

Leicester City have a home game against Sheffield United and a trip to Tottenham Hotspur before they host United at the King Power Stadium on the final day. Worst case scenario for Solskjaer is Leicester win both, which means United can afford to draw against either Crystal Palace or West Ham United and still need to win against the Foxes. Leicester will only be at half-time this evening when Ole has to name the starting XI so he may not have much indication of how many players he can afford to rest. I simply believe that with Crystal Palace being on holiday this is a fine opportunity to rest the first team in order to be fresh to face Chelsea, and still be in an excellent chance to finish in the top four. The risk of playing a strong side tonight means Manchester United could essentially be sacrificing some silverware.

Here’s how I think Manchester United should take to the field at Selhurst Park later today: 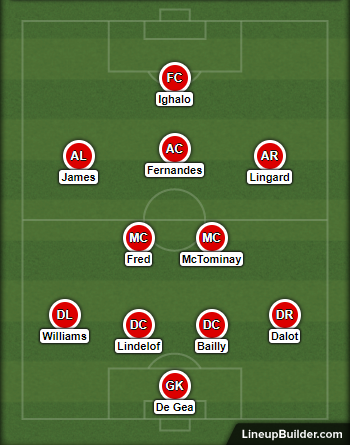