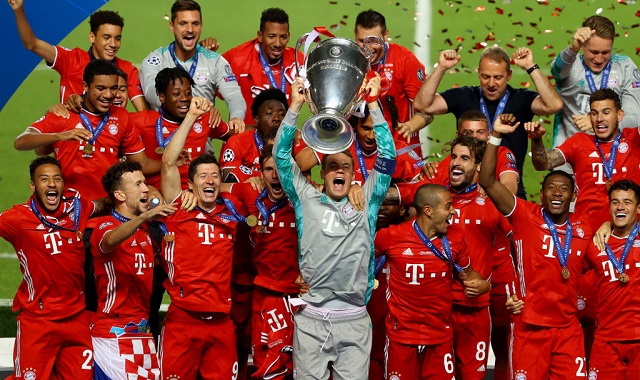 Bayern Munich were crowned the 2019-20 Champions League winners following their 1-0 success over Paris Saint-Germain at the Estadio da Luz in Lisbon, Portugal on Sunday night.

Former-PSG youngster Kingsley Coman headed home the winner from close range on the hour mark in a final that didn’t live up to pre-match expectations.

1 – This was the first time Bayern Munich have failed to score more than one goal in a Champions League game this season.

3 – Bayern Munich became only the second team in European football to win the treble on two occasions (after Barcelona).

6 – Bayern Munich have now won the Champions League on six occasions. Only Real Madrid (13) and AC Milan (7) have lifted the trophy on more occasions.

7 – Each of the last seven teams making their first Champions League final appearance have lost.

14% – French teams have now won just one of the seven Champions League finals they have been in.

34 – Paris Saint-Germain had been on a 34-game scoring streak in the Champions League. This is the first time they have failed to score in the competition in more than three.

67% – The German Bundesliga champions have now won six of the nine meetings with Paris Saint-Germain in the Champions League (D0, L3).

100% – The Bavarians became the first team in the competition’s history to win every single one of their games in the same season.

500 – Bayern Munich scored their 500th Champions League goal, becoming the third side to reach this landmark (after Real Madrid (567) and Barcelona (517)).