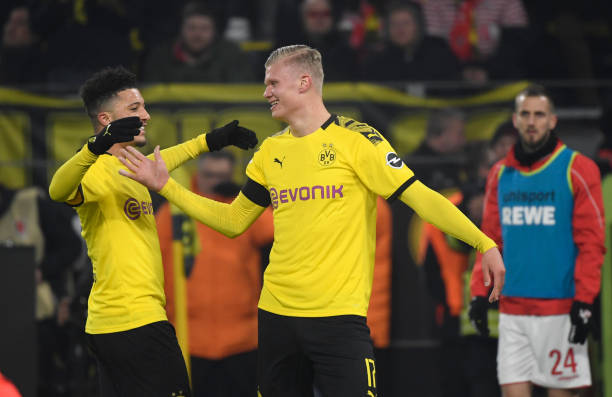 According to The Athletic, Manchester United still want Borussia Dortmund attacking duo Jadon Sancho and Erling Haaland after failing to land them during the recent transfer windows.

The Red Devils signed former Paris Saint-Germain striker Edinson Cavani as a free agent, and now have the Uruguayan, Anthony Martial and Odion Ighalo as their striking options.

However, manager Ole Gunnar Solskjaer wants to prepare for the long-term, with the Nigerian and Cavani just short-term solutions given their age, and he has his former charge Haaland at the top of his list.

The 20-year-old joined the Bundesliga giants last January from Red Bull Salzburg, ending the campaign with 44 goals across all competitions for both clubs.

The Norwegian international has hit the ground running this term, scoring five league goals in as many games, and he continues to attract the bigwigs in and outside of Germany.

Haaland has a clause that will allow him to leave Dortmund if there is a bid of about £68 million in the summer of 2022, but Man Utd are ready to move earlier and at a higher price if it becomes clear the youngster is ready to move.

The Red Devils had wanted him earlier than last January but refused to agree to the release clause demanded by his agent Mino Raiola.

While negotiations between the club and Italian didn’t end well last year, Solskjaer and Haaland remain on good terms given their relationship from the Molde days, and a future move remains very much on the cards.

Sancho also remains in the Norwegian’s plans despite the frustration his side encountered during numerous negotiations with Dortmund during the summer transfer window.

While Cavani is now United’s new number 7 – a shirt originally bracketed for the England international – the 20-year-old could be the next to wear the number at Old Trafford with a move planned for next summer.

According to The Athletic, an informal codename among Man United negotiators trying to strike a deal for Sancho during the summer was “Project No 7”, and plans for him to become the next Red Devils number 7 aren’t dead in the water.

He scored 20 goals last term, weighing in with 18 assists, and landing him alongside Haaland will definitely make Solskjaer’s side huge title contenders.

Whether they are able to pull off both moves next summer remains to be seen, though, and it will be interesting to see what happens then.

One Reply to “Report: Man Utd want duo who scored 64 goals between them last term”