Arsenal are one of the biggest and most popular football clubs in the world. The three-time Premier League champions and 13-time champions of England are also one of the most followed on social media.

The Gunners have more than 38 million fans on Facebook and another 17 million following them on Twitter, as well as further followers on other social media channels.

Content is uploaded every day and a significant number of posts take place during live games, as you will see by following any of their pages this evening when they face Benfica in the second leg of their UEFA Europa League Round of 32 tie.

The two sides drew 1-1 in Rome last week in what was Benfica’s ‘home’ leg, whilst this evening’s game will be played at Olympiacos’ Karaiskakis Stadium in Greece.

Arsenal then return to domestic action on Sunday with a trip to Leicester City in the Premier League. The Foxes are also in action on Thursday – at home to Slavia Prague in their Europa League tie.

After those two games, the North London club will have a new employee. That’s because I came across a Live Producer vacancy of theirs on Freelance Video Collective moments ago (I have no affiliation with the company). 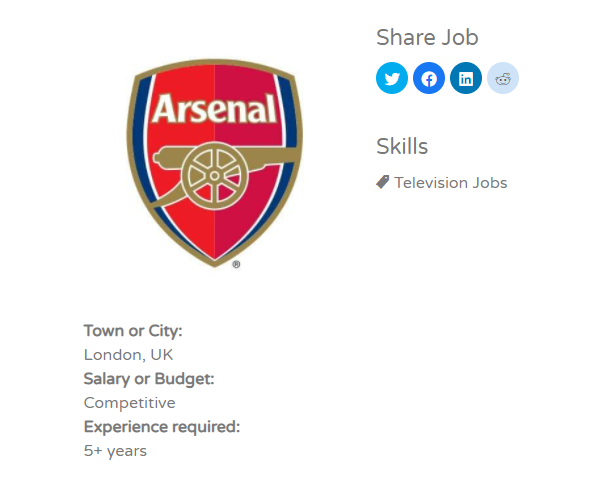 As per the job description, the successful candidate will be tasked to develop engaging content across all media on and off-line platforms. Their key responsibilities are listed as follows:

Club day shoots sound like an opportunity for the new employee to interact with the first team squad and coaches, whilst devising a strategy for their live matchday will likely entail content on Arsenal Player and social media channels.

The vacancy was posted this morning and only has a deadline of this Sunday, 28 February – so get your CVs in as soon as possible! Best of luck to everyone who applies to be Arsenal’s next staff member.