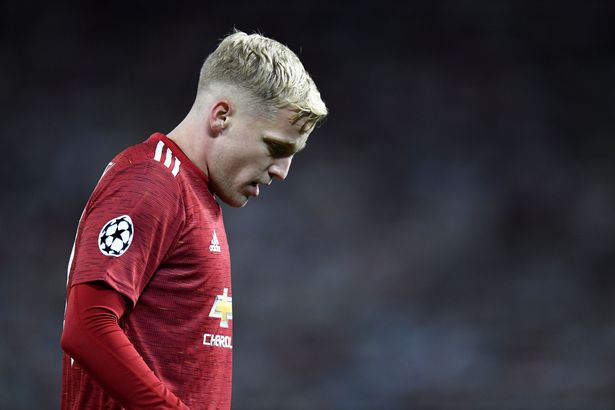 It certainly hasn’t been the Old Trafford fairytale Donny Van De Beek would’ve dreamt of so far , and his time in the North-West appears to be drawing to a close.

A swift departure could be on the cards for the Dutchman, and Solskjaer has his eye on using Van De Beek as a makeweight in a potential move for Erling Haaland or Jadon Sancho.

The 23-year-old is valued at £31.5 million but has so far failed to take to English football like it was expected he would.

The Dutchman has struggled to establish a regular starting place in Ole Gunnar Solskjaer’s side, with the likes of Bruno Fernandes, Paul Pogba and Scott McTominay keeping him on the fringes of the squad.

It perhaps hasn’t all been down to poor performances that Van De Beek has only made five starts all season.

Solskjaer likes to use the double pivot in midfield, which usually consists of Fred and McTominay, who he knows will do the dirty work that allows Luke Shaw and Aaron Wan Bissaka to join the attack.

Whilst in his preferred position, the number 10 role, he has Bruno Fernandes ahead of him who is arguably one of the best players in the world at the time of writing.

Haaland is undoubtedly the hottest prospect in world football at this point and United certainly won’t be alone in their bid to secure his signature, while their long-term pursuit of Sancho looks set to continue.

With the current coronavirus crisis and mounting pressure on Solskjaer to deliver success to the Old Trafford faithful, a swap deal sounds appealing to all parties.

Dortmund make a hefty transfer fee and get a quality playmaker in return, while United ship out their unwanted man and secure the services of one of the most clinical strikers in world football on a cut-price deal.