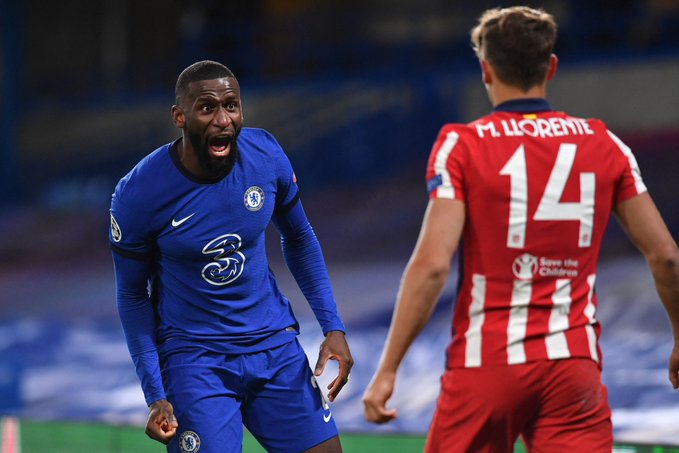 There have been many players who’s performances have picked up under Thomas Tuchel – but one of the most prominent names, and biggest improvers is undoubtedly Antonio Rudiger.

Tuchel has brought him in from the cold in many ways.

The German had lost his way under the previous regime and found game time hard to come by as Chelsea switched between a back three and four, but he couldn’t stamp his authority on either system.

The 28-year-old has found a position on the left side of a back three and he’s made that his own – with no danger of him being dispelled from the team.

Rudiger has been sensational in recent weeks and again tonight he produced a man of the match display as Chelsea advanced to the Champions League quarter-finals – beating Atletico Madrid 3-0 on aggregate.

Goals from Hakim Ziyech and Emerson were enough to cast aside Diego Simeone’s side and further extend Tuchel’s remarkable unbeaten record as Chelsea boss.

It’s another clean sheet too for Chelsea and a large chunk of the credit has to go to Rudiger.

In the absence of Thiago Silva, he has stepped up to be that rock at the back that Chelsea are missing in Silva’s absence.

He’s a colossus of a defender but he can also play, and he’s simply perfect for a Tuchel side.

Chelsea fans, and football fans alike have noticed a marked improvement in his performances.

Rudiger has been absolutely sensational so far. Kante superb. Now ya got Rudi and Zouma laughing Atletico players out of the box… I love this team!

Rudiger is something else right now the boy is on fire burning anything in his way!

This Rudiger performance is the best performance I’ve seen from a Chelsea defender in the past decade.

Suarez will be having nightmares of Rudiger after these last two fixtures. Mans been bullied so bad.. 😭