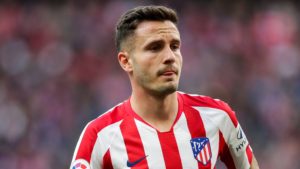 After losing Georginio Wijnaldum to Paris Saint-Germain this summer, Liverpool were keen to strengthen their engine room and had shown an interest in Atletico Madrid midfielder Saul.

The Daily Mail say their pursuit of the 26-year-old has been given a major boost as Atleti have brought in Rodrigo De Paul for €35m (£29.9m) from Udinese, paving the way for Saul to be sold.

The 26-year-old was once a regular at the Wanda Metropolitano, making 337 appearances between 2012 and 2021, but found himself substituted on and substitute off 22 times in La Liga last season – more than in the previous four seasons combined (18).

Atleti are willing to sell Saul for €40m (£34.2m) this summer and the Daily Mail say Liverpool are leading the race for his signature. The Spanish international would be a fantastic coup for the Reds after playing his part in Atleti winning the Liga title last season.

Saul’s international career has faltered in the last two years, however, so that might be one motivation to move out of Madrid. He should be a regular at Liverpool due to his adeptness at turning over possession and ability to drive with the ball from deep, so £34m could be a bargain.

The fact Atleti have seemingly brought in his successor is a good sign they’ll allow Saul to leave without much fuss. Liverpool just need to make sure they’re positioning themselves ahead of any other suitor.

Liverpool were disappointed to lose Wijnaldum on a free transfer, but Saul would be a good replacement. He’s been a fantastic servant for Atleti and has the energy and combative qualities to make the Reds’ engine room robust again.

Saul is also a good footballer, so he’ll bring composure to the midfield. The Spaniard does pop up with the odd goal too, so Jurgen Klopp has a double threat in midfield if Liverpool get this deal over the line.

He’s also only 26 and should have his best moments ahead of him, so Saul could still improve as a player while at Anfield. Time will tell.