Ainsley Maitland-Niles had an uncertain future at Arsenal this summer after falling down the pecking order under Mikel Arteta, but the 24-year-old may have shot himself in the foot with a post on his Instagram story that revealed he wants out of North London following a lack of playing time. 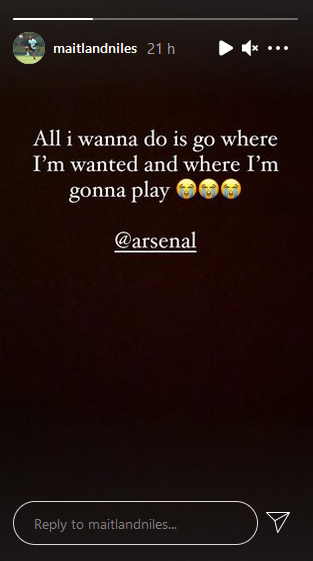 Maitland-Niles admitted wanting to join a side willing to give him first-team opportunities and has kept the post active on his social media, so it’s clear how he feels. John Cross of the Mirror says Arsenal have responded by axing him from the senior squad and forcing him to train alone.

The England international rose through the youth ranks to the Gunners’ first-team in 2014/15 and has gone on to make 123 appearances in all competitions, scoring three goals with eight assists.

Maitland-Niles managed only 485 minutes of Premier League football with Arsenal last season, so he spent the second half of the campaign on loan at West Bromwich Albion.

And upon his return to London Colney, Maitland-Niles finds himself surplus to requirements, so he’s understandably frustrated. The 24-year-old has so far played 19 minutes of football in the Premier League and 29 minutes in the League Cup.

Hector Bellerin, Calum Chambers and Cedric Soares can operate at right-back while Thomas Partey, Granit Xhaka, Mohamed Elneny and Sambi Lokonga can operate in midfield, so Ainsley Maitland-Niles has little chance of playing.

Where he’ll go remains to be seen, however. Arsenal have already blocked a move to Everton which would have seen them loan Maitland-Niles for the season and potentially buy him at the end of the season, so his future is up in the air on transfer deadline day.

Arsenal can’t afford to keep an unhappy player in the team, so it may be best for all parties if they could offload him before the transfer window shuts.

It’s hard to see a club putting up money to sign Maitland-Niles permanently rather than on loan, so a temporary switch away might be all that’s possible.

And the 24-year-old will return to Arsenal next summer with one year remaining on his contract.