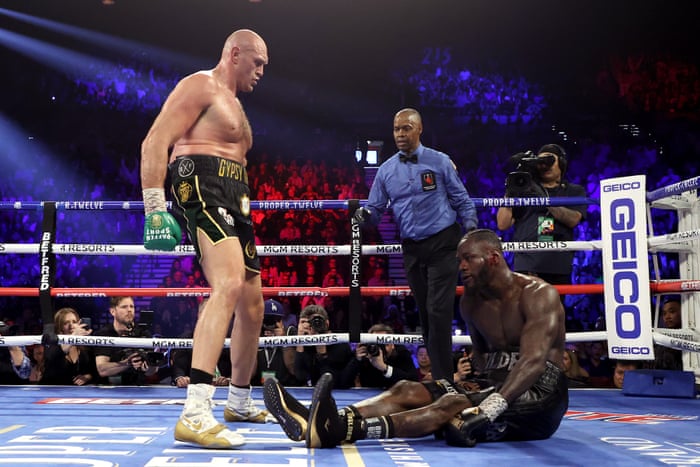 A lot of different scenarios have unfolded over the first two Tyson Fury-Deontay Wilder heavyweight title bouts. One outcome that’s not been seen in either fight, though, is a Wilder victory.

As the third fight of this trilogy of title fights approaches on Saturday, October 9 at T-Mobile Arena in Las Vegas, both the oddsmakers and the betting public don’t envision it being third-time lucky for Wilder.

British champion Fury, holder of the WBC and The Ring Magazine world title belts, is the -300 betting favourite to win Saturday’s fight. Wilder is a +240 underdog.

Fury is also given -110 odds to take the fight via knockout, technical knockout or disqualification. On the other hand, American Wilder is given +1800 odds to win the bout via decision.

The betting public is also strongly in Fury’s corner heading into the fight. A Twitter poll by British Gambler is showing that 62 percent of those who responded envision the outcome on Saturday being a Fury victory via KO or TKO. A Fury triumph by points is supported by 26.4 percent of punters.

Wilder garnered 10.1 percent backing to win by knocking out Fury. Only 1.5 percent of respondents believe it’s possible that Wilder carries the day via a points decision.

The Fire And The Fury

The first fight on December 1, 2018 at the Staples Center in Los Angeles ended in a draw. Wilder put Fury down on the canvas twice but couldn’t finish him off. Over the course of the bout, though, Fury landed 26 percent of his punches, compared to just 17 percent for Wilder, reported Sports View.

The rematch was held on February 22, 2020 at MGM Grand Garden Arena in Las Vegas. Fury dominated from the opening bell. The British giant floored Wilder in the third round and again in the fifth round. The bout ended when Wilder’s corner threw in the towel during the seventh round. At the time the first was halted, Fury was well ahead on all three judges’ cards – 59-52 on two of them and 58-53 on the other.

What’s Left for Wilder To Try?

It can be argued that Wilder is always in with a puncher’s chance. Then again, he hit Fury with some punishing shots in their first fight and Fury displayed a granite chin, rising from the deck to continue each time.

The dilemma facing Wilder is that he needs to fight inside. He’s a puncher, not a boxer. And when they fought the second fight in that manner, Fury absolutely demolished him.

Wilder unleashed a litany of excuses for his loss, from a heavy costume he wore on his ring walk fatiguing him, to his own corner undermining his efforts.

Fury’s style is so unorthodox, it’s difficult to prepare for him. Finding someone to spar who can mimic what Fury brings into the ring is nearly impossible.

Analyzing all of boxing’s great trilogies, from Ali-Frazier to Zale-Graziano to Ward-Gatti, there’s a common element – no one who’s failed to win either of the first two fights has ever won the third fight.

Wilder is correct when he assesses that there’s something conspiring against him when he’s in the ring against Fury, and anyone who’s watched the first 19 rounds between these two fighters can also identify that element.

It’s painfully evident that Fury is the better fighter.