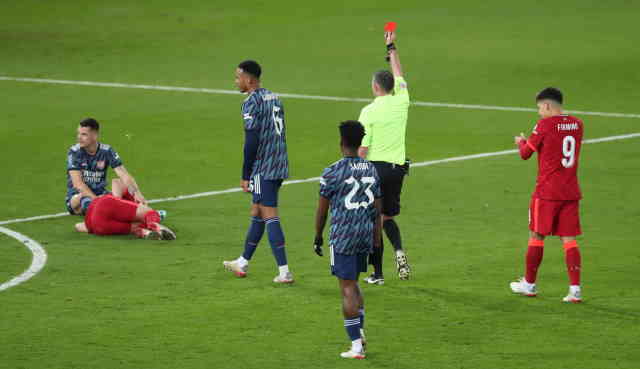 Arsenal and Liverpool go head-to-head at the Emirates Stadium in the return leg of their mouth-watering Carabao Cup semi-final tie, a game you should be able to watch via a number of soccer streams online.

Despite going down to 10 men only 24 minutes into their first-leg clash at Anfield, courtesy of Granit Xhaka’s straight red, the Gunners eked out a goalless draw against an understrength Reds side.

In fact, Mikel Arteta’s side only faced one shot on target in Merseyside last week as there will be everything to play for when the two sides meet again on Thursday.

Liverpool could be in slightly better shape following a scintillating 3-0 romping of the Premier League newcomers Brentford at the weekend.

However, Jurgen Klopp’s men have struggled with inconsistent performances in the early stages of 2022.

They have alternated between victories and draws across their opening four competitive games of the new calendar year despite scoring 2+ goals on three occasions.

Meanwhile, Arsenal’s all-London showdown against rivals Tottenham Hotspur on Sunday has been postponed at the 11th hour due to a COVID-19 outbreak in the Emirates camp.

It has not been the kind of start Arteta was hoping for following his team’s high-flying end to the last calendar year.

The Gunners closed 2021 out on a run of five consecutive triumphs in all competitions, netting an average of 3.8 goals per match in that sequence.

But they have started 2022 with a whimper rather than a bang, going winless in all three competitive fixtures (D1, L2), including a shock FA Cup exit at the hands of Nottingham Forest.

Arsenal and Liverpool have already met twice in competitive action this season, with the Gunners failing to get on the scoresheet on both occasions (D1, L1).

Bringing the 2020/21 season into the equation, Arteta’s players have now drawn a blank in four successive encounters against the Merseyside powerhouse.

That is as many scoring blanks as they had against Liverpool in their previous 50 competitive H2Hs beforehand.

Furthermore, Arsenal have only won one of their last 17 matches against the Reds in all competitions (D8, L8).

The hosts can at least find some comfort in knowing they have yet to lose a League Cup H2H in the nation’s capital (W3, D3).

Apart from Thomas Partey and Nicolas Pepe, who are currently away at the Africa Cup of Nations, Arteta has to deal with a substantial list of injured players and COVID-19 related absences.

According to The Guardian, Takehiro Tomiyasu, Emile Smith Rowe and Sead Kolasinac are struggling with injuries.

Meanwhile, Bukayo Saka and Cedric Soares picked up knocks in the first leg at Anfield while Martin Odegaard headlines the list of COVID-19 cases in north London.

Since the identities of the new positive COVID-19 cases at the Emirates have yet to be revealed, it is almost impossible to predict Arteta’s line-up on Thursday.

Thiago Alcantara and Divock Origi have joined long-term absentee Harvey Elliott on the sidelines with a muscle and a knee injury, respectively, leaving Klopp short of reliable options in the midfield and attack.

Despite lacking a host of first-team stars, the German can call upon the likes Roberto Firmino and Diogo Jota to handle the scoring burden in London.

Alex Oxlade-Chamberlain, who was on the scoresheet at the weekend, could return to the starting line-up to complement Klopp’s attacking trident alongside the aforementioned duo.