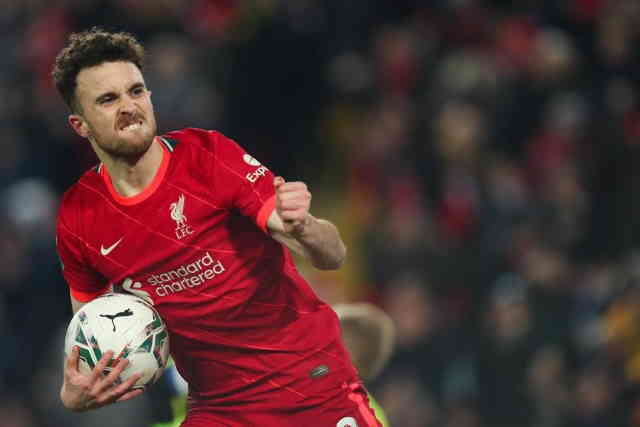 Saturday’s Premier League action gets underway at Anfield as title-bidding Liverpool take on relegation-threatened Watford, and for those betting on Liverpool to win the Premier League this season, this BetBull £100 signup offer is an excellent starting point.

Liverpool have slashed the betting odds and reignited their Premier League title bid after winning their last nine league matches by an aggregate score of 27-2, reducing the gap on table-topping Manchester City to a single point.

Most recently, Jurgen Klopp’s side overcame Championship outfit Nottingham Forest harder than expected in their FA Cup quarter-finals tie on the stroke of March’s international break.

Diogo Jota slotted home a late winner at the City Ground to catapult the Reds into their first FA Cup semi-finals under Klopp.

In the meantime, Cucho Hernandez’s first-half brace fired Watford to a crucial 2-1 win away to Southampton last time out to boost the Hornets’ hopes of ensuring top-flight survival.

Roy Hodgson’s men have halted a run of four Premier League games without winning (D1, L3), as they now sit three points below 17th-placed Everton, who have two games in hand.

Liverpool boast a resounding 92% win ratio in home league meetings with Watford, having won 12 of their 13 such fixtures, including the last six in a row by an aggregate score of 22-1.

The Reds are one victory away from stringing together 10+ Premier League wins for the third time under Klopp’s guidance, with only Man City’s Pep Guardiola (4) achieving that feat on more separate occasions in the competition.

The Merseysiders head into proceedings as the only Premier League side to have gone unbeaten in 100% of their top-flight home outings this season (W11, D3).

Watford scored as many goals at St Mary’s Stadium (2) last time out as they had in their previous six Premier League away fixtures combined.

Goals have been in short supply for the Hornets this season, as only four clubs have netted fewer Premier League goals in 2021/22 than them (29) thus far.

On the bright side, though, Watford have gone unbeaten in four of their six away league matches under Hodgson (W2, D2, L2), picking up as many points (8) as across their 17 top-flight travels beforehand.

Liverpool will be without Trent Alexander-Arnold, who withdrew from the England national team due to injury, according to talkSPORT.

However, Andy Robertson could recover in time to meet Watford after missing out on Scotland’s friendly against Poland due to illness.

All three players are set to spearhead their national teams’ efforts to qualify for Qatar 2022.

One between Salah and Mane will miss out on winter’s showpiece event as Egypt and Senegal go head-to-head in the World Cup qualifying play-offs.

Meanwhile, Jota will partner up with Manchester United’s Cristiano Ronaldo up front when Portugal take on North Macedonia in their play-off final.

As for Watford, Hodgson should have his entire squad fully fit.